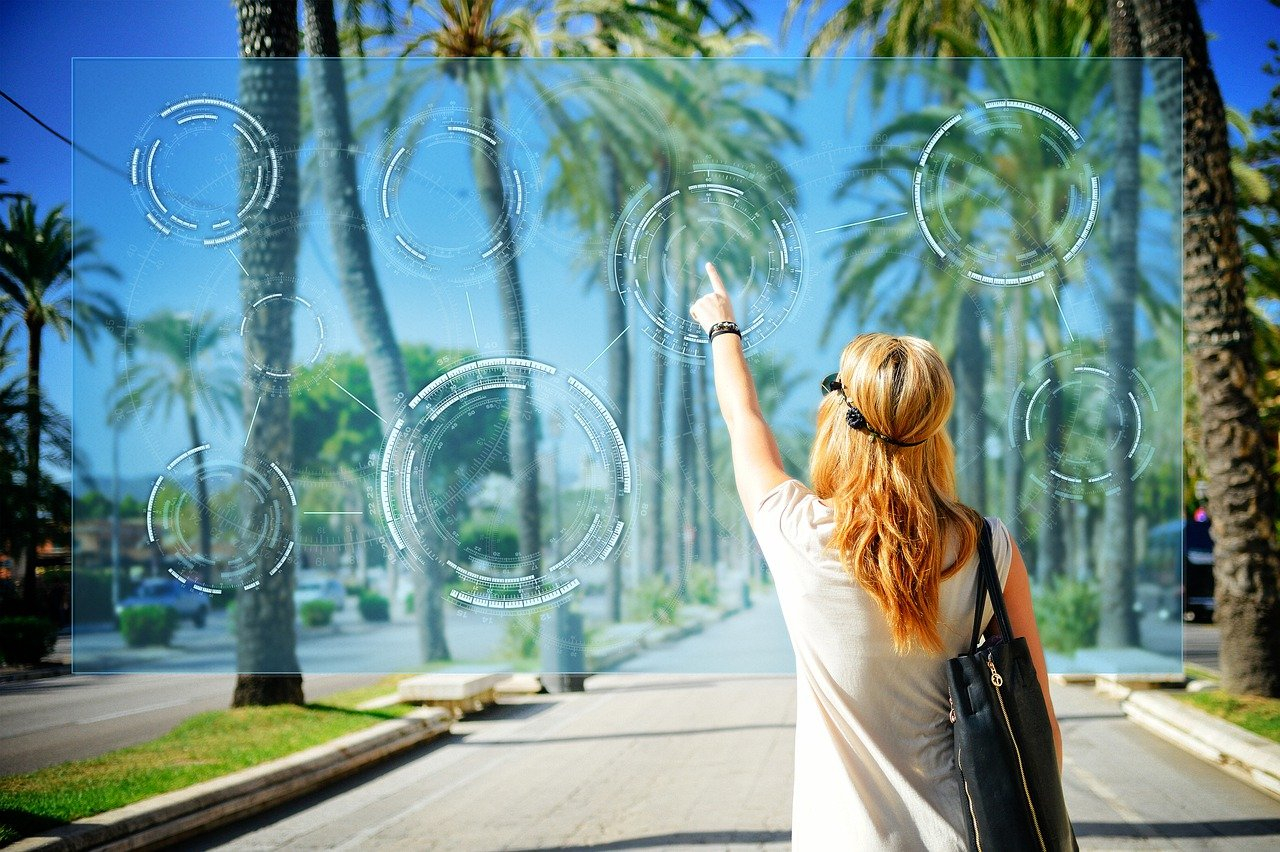 Everywhere you go these days, people are talking about metaverse crypto projects. At their simplest, the combination of cryptocurrency and VR goes hand in hand, but this is still an industry that needs to prove and refine itself.

Right now, there's a boom in metaverse projects, each vieing to shape the future of both metaverse crpyto and the nature of digital real estate. Of course, history teaches that not all will be successful, so it's always worth keeping an eye on the best metaverse projects out there.

The Technolology Behind Metaverse Projects

Before we begin, it's best to go over the basics behind the metaverse and the technologies behind this booming industry.

The Metaverse has existed for along time as a concept of virtual worlds and digital assets. At it's core, it relies on virtual reality technology to create a virtual world. While technology has supported this to some extent, a true metaverse uses additional technology, such as metaverse tokens in the form of cryptocurrency, to give more legitimacy to digital real estate. The continued rise and acceptance of crpyto wallet technology for the wider public has only maid metaverse blockchain projects more appealing.

For example, before crpytocurrency, in game items only belonged to the company that owned the project. In the metaverse, however, such items are treated similarly to real world assets. Digital plots can be traded like real estate, for eaxample, backed by decentralized autonomous organization in the form of blockchain assets and platforms. Companies can create their own metaverse within different projects, but gamers would be free to trade, own and even potentially profit in ways that are free from the producers or publishers.

In recent years, the term has only increased with the rise of metaverse projects. Most notably, Facebook changed its name to Meta Platforms and dedicated itself to building metaverse projects. It's this pledge from the world's largest social media platform that has spurred on even greater interest in metaverse crpyto projects.

The Sandbox: NFTs in a Virtual World

Best described as a virtual world based on NFTs, blockchain and cryptocurrency, Sandbox is leading the way in metaverse online games.

As a virtual reality sandbox, games like this thrive by enabling user created environments and assets, the enabling said users to enjoy real, tangible benefits of ownership. In Sandbox, this can come in the form of land parcels, in-game goods or even avatar customizations.

As it's core, Sandbox uses ethereum blockchain techology paired with its own currency, SAND tokens. While many games already exist for social interaction, such as Second Life, Sand allows uers to create content, protect it and even financially benefit from it. While in-game currency is nothing new, the use of cryptocurrency and non fungible tokens only adds new layers.

From financial protection, direct conversion into other currencies to the ability to safely and efficiently trade with other users, as well as earn a passive income, Sandbox represents a brave new take on multiplayer video games for the post-metaverse digital world.

Start Atlas is another blockchain game example, but that should not come asa surprise. People have always liked to play games, especially in large open environments, and the idea of a gaming metaverse only makes sense. Star Atlas is one such example - this time a space-flavoured metaverse universe with real play to earn potential.

The open world science fiction genre has long been associated with Games like EVE online have blended elements of RPG games with a digital economy for many years. The problem in the past, however, was that these assets were owned by the company, leading to a one-wayn system in which only the original publisher ever truly profitted.

But make no mistake; while it utilizes blockchain technology (in this case, the Solana blockchain) this is first and forement designed to appeal to gamers. It's based on the Unreal Engine 5 and has a team of developers behind it and provides a genuinely immersive experience.

How it beats other projects like EVE Online, however, is that players are free to buy plots of land, build entire cities, host events and even stake their assets. The game uses Serum DEX, so players can trade the game's native token, or even borrow within the Star Atlas metaverse without the developers needing to oversee every process.

Of course, there is still a small transaction cost (as is typical of blockchain; someone needs to validate the transactions of other blockchain assets), but this is further encouraged in-game from other players, further generating the metaverse economy.

Unlike Sandbox or Star Atlas, Axie goes in a different direction: monsters and creatures that can be bought, traded, bred, upgraded and more. If Star Atlas is the metaverse answer to Star Atlas, and Sandbox is comparable to Second Life, than Axie might just be the metaverse project to take on Pokemon.

Gamifaction is als built in. Gamers need a minimum of three monsters (Axies), and can generate experience to level them up. Naturally, players are encouraged to partake in the play to earn aspects of the game as a result. And with a growing plethora of Axies, each uniquely grown by their players, the range of virtual real estate only grows.

The building blocks are all there. The genre already has digital collectability build in to it, and the use of the underlying blockchain (again, the ethereum blockchain, but this time with the native metaverse token awesomely known as "smooth love potion").

While we wouldn't say it's the best metaverse example here - it's graphics could be better and it doesn't use the full features of virtual realit as others too on this list, it's bonafide digital proof tht this concept can work.

With its origins dating back to 2016, Decentraland might just be one of the oldest and best metaverse crypto projects on this list, so it's worth pausing to reflect on it. The game has constantly been updated, and today represents a vibrant, fully developed virtual reality platform fully fueled by metaverse crypto.

In Decentraland, players are highly encouraged to only buy, sell and stake digital assets, but also create them. Of course, this requires some coding skill, but it pushes the boundries between user build games and a company's own metaverse. Players are free to create, trade, sell and even dispose of digital real estate, with the metaverse crpyto simply acting as the foundations for this play to earn platform.

As an added bonus, Decentraland might just be one of the top metaverse projects for introducing new users into the potential of the blockchain platform and associated crypto projects (even outside of the metaspace). The game can be played both with and without a digital crypto wallet.

Of course, the "without" option comes with strong limitations, but it nonetheless lets gamers enter the metaverse space, if only to sample it. Gamers can do their own research, get their own experience and, when they're ready, join the metaverse.

So what do the top metaverse projects have in common? Aside from the underling metaverse crpyto technology, therte are actually a few key features. This is by no means a full technical analysis, but it's worth noting the key design elements found throughout...

There's a strong reason why these crypto projects are all based on games. While the wider metaverse is designed to enable social interaction, social media isn't the way forward for these new projects.

Sure, social media has its own opportunities when it comes to advertising opportunities but, to create an active, vibrant economy, gamers need a reason to attach value to in game events and assets. Gaming brings goals, objectives and a desire to go further, which pairs excellently with gaming. Studios, likewise, also have no problem integration metaverse coins, blockchain or other technologies with their software development kits.

Once set-up, all of these platforms seek to disrupt or bother players as little as possible. For metaverse crypto projects to be successful, the economy behind the digital real estate needs to be independent.

This reflects a new payment method for those companies, too. Rather than directly benefitting from players cashing in real-world money for their virtual real estate, they instead benefit from the activity of the blockchain.

What we've quickly seen is that games need multiple approachs to keep people engaged. A game that only lets users buy digital plots, for exmaple, won't work with metaverse crpyto projects. Gamers need something to put in those plots, host in game events of their own or even just customize their own avatars.

Singular options lead to stale economies; gamers rate everything the same, and the need to buy and trade quickly diminishes.

Star Atlas offers ships, weapons, resources and more, all of which is useful for in game (see gamificaition, above). Others, such as Decentraland, go so far as to give players as much freedom as is technically possible.